“We’re now looking literally at 2021 being the worst humanitarian crisis year since the beginning of the United Nations, and we’re going to have to step up as some 270 million people are on the pathway towards starvation.”

“That plastic sheet keeps moving closer. I’m trying not to panic, but where am I supposed to go? It’s not like I can jump up and make a run for it. I’m in a wheelchair and am a sitting duck that can’t afford to wait for a vaccine.”

Bruce MacGillis, resident of Ohio nursing home that called 911 to be rescued

“Is there anyone in the York Hospital, Hershey Hospital, Penn State, Temple or Maryland Hospitals that has connections to the COVID ICU? My mom is not doing well and is maxed out at Hanover Hospitals capabilities.  We are looking for a hospital that has an ECMO machine and a bed so Hanover can transfer her to you. I’m sorry to be blunt but FB is the fastest way to get news out. Hanover Hospital is making calls, but I can’t move forward without giving it my best shot.”

Shawn Rider, pleading for help for his mom from Facebook friends

“We’ve had Operation Warp Speed in developing vaccines but Operation Turtle Speed in reviewing the results.”

Dr. Marty Makary, a professor at the Johns Hopkins University School of Medicine and Johns Hopkins Bloomberg School of Public Health, lambasting the Food and Drug Administration for lacking urgency in greenlighting a coronavirus vaccine, suggesting that the agency’s bureaucratic process is costing lives

Navigational Tips:  Except for the stories listed under Linked Stories, all of the stories listed below are included in this update.  And to the extent available, we have embedded links in the title of the stories to the extent available so that you can quickly jump to the original story on the internet if you want by clicking on the title.  If you reading the Word document, you can jump to a section by holding down the control key+clicking on the title of the section.]

I. Projections & Our (Possible) Future

(In no particular order)

Note: Unless otherwise noted, (i) all cases/deaths are confirmed cases/deaths that have been reported, (ii) all numbers reported in this update are as of the end of the most recent reporting period, and (iii) all changes reflect changes since the preceding day.

4. New Infections Reported in U.S. Topped 1.3 Million in a Week

5. The virus is devastating the U.S., and leaving an uneven toll

1. Asymptomatic Spread Not a Significant Source of C19

Governments Could Do More To Help

3. Should Isolation Periods Be Shorter for People With C19

1. Blood Tests May Be Key To Future C19 Vaccine Development

2. Here’s what scientists want to know about the vaccines

Do the vaccines prevent transmission of C19?

How long will vaccine-induced immunity last?

How well do the vaccines work in groups such as old people and children?

How do the vaccines stack up against each other?

Could the virus evolve to evade immunity given by vaccines?

How will scientists monitor for long-term safety concerns?

3. Find your place in line. When will you get the vaccine?

4. A Rapid Covid Test That’s Also Accurate? The NFL Says It Has One

1. Potential of Hepatitis C Drugs to Treat C19 by Stopping the Virus From Spreading

1. The U.S. Has Passed the Hospital Breaking Point

2. What happens when the immune response is out of sync?

1. A virologist explains the ‘Swiss cheese model’ of pandemic defense

A Simpler Test through Direct Detection

Accurate and Quick Results to Limit the Pandemic

I. Projections & Our (Possible) Future 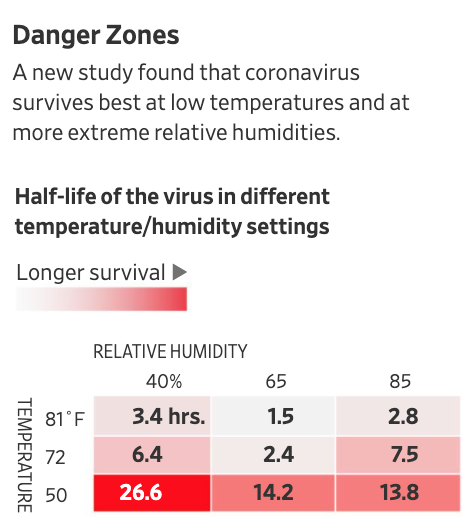 Dr. Morris of UCLA, working with colleagues at the Rocky Mountain Laboratories in Hamilton, Mont., and at Princeton in New Jersey, recently conducted laboratory experiments to see how SARS-CoV-2 and four other coronaviruses responded to variations in temperature and relative humidity. They tested combinations of temperatures ranging from 50 degrees Fahrenheit to 80.6 degrees Fahrenheit, and levels of relative humidity from 40% to 85%.

Which produces a stronger immune response: a natural infection or a vaccine?

I’m young, healthy and at low risk of Covid. Why not take my chances with that rather than get a rushed vaccine?

How to Acclimate to the Cold

3. How Airflow Inside a Car May Affect C19 Transmission Risk – What Works Best for Windows and Ventilation

A study published recently in Science Advances looks at how airflow patterns inside the passenger cabin of a car might affect the transmission of SARS-CoV-2 and other airborne pathogens. The simulations produced some potentially counterintuitive findings. For example, one might expect that opening windows directly beside each occupant might be the simplest way to reduce exposure. The simulations found that while this configuration is better than no windows down at all, it carries a higher exposure risk compared to putting down the window opposite each occupant. “When the windows opposite the occupants are open, you get a flow that enters the car behind the driver, sweeps across the cabin behind the passenger and then goes out the passenger-side front window,” said Kenny Breuer, a professor of engineering at Brown and a senior author of the research. “That pattern helps to reduce cross-contamination between the driver and passenger.” Credit: Breuer lab / Brown University